In the past, coherent optics have been cost-effective only in extremely long intercontinental and undersea links. Recent advances have made this solution more accessible to designers looking for ways to increase data transfer speeds, extend channel lengths, and grow system capacity. In its simplest form, an optical channel consists of a device that converts information into a series of binary optical pulses that represent either a one or a zero. Non-Return-to-Zero (NRZ) PAM2 modulation has dominated optical data channels for many years. This form of optical communication is known as direct detect and has become a staple communication link in telecom and data center optical interconnects.

Simple links like this are ideal for a single data stream, but data center and telecom networks require high-speed transmission of large files to multiple points as efficiently as possible.

Installing more optical fiber to expand capacity is an effective but costly solution. Multipole fibers in parallel can be aggregated to increase total channel bandwidth but add bulk.  Fiber optic cables may contain one to over 3,000 optical fibers, but cable trays in large data centers are already overflowing. The cost and time required to obtain permits, access to right of way, and installation of new external optical cable makes the quest to squeeze as much data through each existing fiber an imperative. Direct detect optical signaling performance can be improved by using advanced amplitude modulation schemes that increase the number of bits transmitted per cycle. The ability to improve the efficiency of each clock cycle by doubling the bit rate for a given baud rate has resulted in broad adoption of PAM4 modulation.

PAM4 signaling has become the preferred mechanism to achieve 56+Gb data rates in both copper and fiber optic channels. Standards and MSA organizations including OIF, PCIe, InfiniBand, and Ethernet have adopted PAM4 modulation for their latest specifications.

In many data centers the transmission bandwidth of a single optical fiber using direct detect technology has already begun to reach practical limits. To further support the connectivity demands of high speed and capacity, advanced optical fibers have been developed.

An alternative to traditional single core fiber is the introduction of multi-core fiber (MCF) which integrates multiple parallel cores within a single optical fiber. Advances in manufacturing and terminating multicore fiber are making it a more economically viable alternative to conventional single core fiber. Additional advances in optical fiber construction include hollow core fiber that replaces the standard glass core with an air-filled capillary. With light traveling 50% faster in air, this unique cable is finding applications where extremely low signal latency is a primary objective.

Improving the spectral efficiency of each fiber has become a focus in the effort to increase the data capacity of optical channels. Wave Division Multiplexing (WDM) has proven to be a highly effective solution. Rather than sending a single wavelength of light through an optical fiber, multiple signals are sent simultaneously by using slightly different wavelengths (colors) of light for each channel. The WDM process creates many parallel virtual fibers, each capable of carrying a different signal.

Optical transmitters and receivers are tuned to send and detect only specific wavelengths. The combined light is sent over a single fiber. This is particularly attractive where WDM can be used to increase the capacity of an installed fiber. The continuing quest for increased information transfer has led designers to take the next step of utilizing both DWDM and coherent optics technology. Unlike conventional amplitude modulation, such as PAM2 or PAM4, which transmits a single stream of data, coherent detection can increase the data transfer capacity of an optical fiber by modulating not only the amplitude, but also the phase and polarization properties of light.

The intensity, phase, and polarization of the optical signal are recovered using an integrated coherent receiver and digital signal processor (DSP) chip that reconstructs the original signal characteristics to recover the data bits. 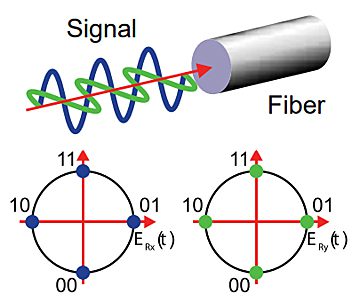 Use of coherent optical transmission is not without its challenges. Higher bit rates require more complex modulation schemes putting symbols closer together making them more sensitive to noise. The solution is the use of strong FEC (forward error correction) integrated in the DSP that can add to power and heat budgets. The current lack of a unifying organization to assure interoperability among competitive products is also a concern.

In the past, coherent optics have been cost-effective only in extremely long intercontinental and undersea links. Recent advances in silicon photonic packaging and development of 7nm DSPs have enabled the fabrication of modules that include the DSP, laser, amplifier opto-detector, and RF integrated circuits on a monolithic substrate, dramatically reducing cost and enabling integration of coherent optics into industry standard pluggable form factors.

Higher power long-reach coherent transceivers are also available as embedded PCB-mounted modules and can deliver up to 800 Gb/s. Combining DWDM with coherent modulation has extended the optical network roadmap from 100G to 800G and beyond. At this point, coherent pluggables utilizing industry initiatives including Open ROADM, 400ZR, Open ZR+, and Open XR are converging on 400G, which is likely to dominate optical networks for the next five to ten years. Coherent QSFP-DD and OSFP pluggables using 400ZR, an Ethernet-based networking interface, are available today and offer up to 80 channels @ 400 Gb/s for a total capacity of 32 Tb/s.

Data centers are in the process of evolving from 100G to 400G and eventually 800+ Gb networks with a reach of up to 1000+km. A key technology that will enable this transition are coherent pluggable and embedded coherent transceivers. Several 800G pluggables in the QSFP-DD800 profile have already been announced for early customer evaluation.

Interest in coherent optics is not limited to the data center.  Cable operators are looking to the advantages of point-to-point coherent links from the hub to an aggregation node using installed fiber. As component prices continue to fall, coherent technology will migrate into shorter metro and edge applications where cost per bit is a primary consideration.

A fundamental principal in information theory is the Shannon Limit, which defines the maximum rate of error-free data that can be transferred over a channel subject to noise.

The relentless push for faster baud rates, higher network capacities, and maximizing reach will continue to be enabled by optimized optics that seek to deliver performance as close to the Shannon Limit as possible.

Like this article? Check out our other Fiber Optics and High-Speed articles, our Datacom Market Page, and our 2022 Article Archive.