Copper and Fiber Optic Connectivity in the Data Center

Hyperscale data centers around the globe are in the middle of a foundational transformation that is changing the way data is communicated both internally and externally. Copper cables have traditionally served most network links between servers, routers, and switches. With data centers that are now measured in acres and house several hundred thousand devices, system designers adopted active copper and active optical cables to support longer reach applications, but even these are now reaching their performance limits.

Broad expansion of cloud and edge computing are two of the many factors that are driving the rapid increase in the number and size of data centers. Looming on the horizon are emerging technologies including artificial intelligence, fully autonomous transportation, 8K video, Industry 4.0, and the metaverse that will demand incredible computing power delivered with nearly zero latency. The laws of physics, along with the introduction of ground-breaking optical technology, including silicon photonics, advanced laser modulation techniques, and new generations of optical fiber and connectors, have brought optical transport nearer to the tipping point of economic parity with copper in select applications.

The Data Center Interconnect (DCI) market is in an unprecedented growth mode which is expected to continue well into the future. A gigawatt-scale master-planned data center community has broken ground on more than 2,100 acres in Frederick, Maryland. The site will be designed to serve the needs of a variety of data center operators including hyperscalers as well as colocation service providers. The conduit-based infrastructure will support more than 200,000 strands of optical fiber. TE Connectivity’s Octal Small Form Factor Pluggable (OSFP) connectors and cable assemblies address next-generation data center needs by supporting aggregate data rates of 200 Gbps and up to 400 Gbps. These products are designed for both 28G NRZ and 56G PAM-4 protocols, with a roadmap to 112G PAM-4 for future system upgrades.

The economic and performance equation between copper and fiber has been gradually shifting to today where fiber is now becoming competitive in an increasing array of applications. Advances in fiber durability, bend radius, and loss characteristics. coupled with new laser sources and modulators, are making fiber a more attractive alternative to copper in select applications. A single optical fiber the size of a human hair can transmit 64 channels of data thousands of meters at gigabit-per-second speeds. At the same time, high-speed copper links may be hitting a technical wall in terms of reach as data rates approach 224 Gb/s PAM4. As speed increases, the negative effects of crosstalk, reflections, skew, attenuation, and intersymbol interference (ISI) degrade performance.

While copper is approaching its technical limits, fiber is opening a window to supporting the data transmission demands of the future. The result is gradual adoption of fiber interconnects both outside and increasingly inside the data center. What have traditionally been copper jumper cables between servers, switches, and racks are now being replaced with fiber optic links that range from a few meters to hundreds of feet. In today’s huge data centers, the transmission efficiency and reduced bulk of fiber becomes highly attractive. Ethernet, which continues to serve as the communications backbone throughout data center and carrier networks, is in the process of evolving to 800G optics with an eye toward the standardization of 1.6 Tb Ethernet.

The cost of a fiber optic link has historically been higher due to the cost and power consumption of the electro-optic conversion process that must occur at both ends of the channel. Fiber is perceived as fragile and termination difficult. Unlike Power over Ethernet (PoE), fiber cannot deliver power to a remote device. The global fiber optic connector and cable assembly infrastructure is much smaller than the established universe of copper connector and cable assembly suppliers. For purely economic reasons, copper interconnects will remain the most cost-effective solution for many applications well into the future, while a relatively small but growing segment of applications will demand the performance advantages of fiber.

Advances over the past 10 years have mitigated many of these issues to the point where fiber is now being considered as a lower cost alternative to copper in select applications, largely due to its immense data transfer capacity as well as extended reach. The use of coherent optical transceivers using DWDM technology can potentially eliminate an entire equipment shelf in the data center, simplifying and flattening the network while reducing cost. Emerging co-packaged optics (CPO) technology, which locates the electro-optic conversion process on a common substrate with a high-speed switch or ASIC, may be able to reduce power consumption of next-generation switches while greatly increasing I/O density on the faceplate. 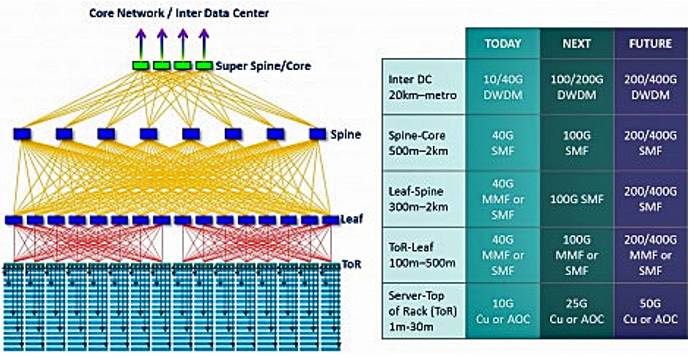 OSFP connectors are the newest contender targeting 800 Gb applications in next-generation data centers, campuses, and other mid-range reach applications. This pluggable module features integrated open or closed top heat sink fins as well as ventilation holes as defined in the specification which also includes recommendations for airflow and pressure.

A potential addition to the roster of pluggable optical transceivers is a developmental 2 X 8, 16-lane electrical interface OSFP-XD (Extra dense) module. The 4X 400G MSA, an industry group of photonics leaders founded by Molex, Arista, Broadcom, Intel, and AOI, has proposed this concept as providing a path to a 1.6 Tb pluggable optical transceiver operating at 100 Gb per lane to support next-generation 51.2 Tb switches.

Co-packaged optics (CPO) is an advanced integration of optics and silicon on a single packaged substrate targeting next-generation switch bandwidth and power challenges. The long-predicted demise and replacement of copper circuitry by fiber optic alternatives remains just that, but as bandwidth demands continue to rise, optical transmission will offer a cost-effective alternative in a gradually increasing number of applications.

Bishop & Associates recently released Copper and Fiber Connectivity in the Data Center, an in-depth 275-page market research report that explores the rise of optical interconnection to address the bandwidth, space, power, and security demands of the rapidly expanding network of global data centers. To see a detailed table of contents and learn how to order, visit Bishop & Associates.

Like this article? Check out our other Fiber Optic, High-Speed and Data Center articles, our Datacom Market Page, and our 2022 Article Archive.