What are SMA Connectors?

SMA (Sub-Miniature version A) coaxial RF connectors were developed by Amphenol in the 1960s as a sub-miniature connector interface for RF cables with a screw-type coupling mechanism. Since then, many variants of the SMA series have evolved to meet the ever-changing requirements of the RF and microwave industry. 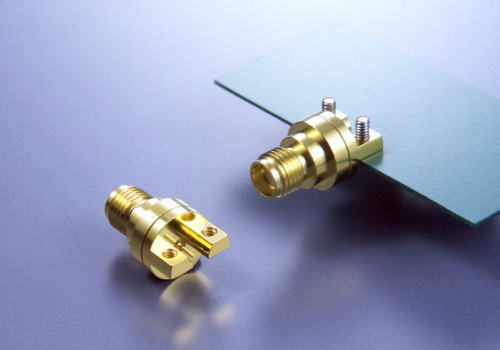 The connector has a characteristic 50 Ω impedance and was originally designed for use from DC (0 Hz) to 12 GHz. This has, however, been extended over time and variants designed to work at 18 GHz and 26.5 GHz are now available.

A standard-polarity SMA male connector has a 0.9 mm diameter center pin surrounded by a barrel with inside threads, and the standard SMA female connector has a center sleeve surrounded by a barrel with outside threads. The gender assignment corresponds to the innermost electrical component. The center pin is the same diameter as the center of RG402 Coax so that connections can be made without discontinuity. The pin is formed from the coax itself.

A reverse polarity RP-SMA, available in all styles, reverses the gender of the interface to allow for port identification and prevent the mating of incorrect antennas or devices to equipment. The pin and sleeve are swapped so that the male RP-SMA has a center sleeve surrounded by an inside-threaded barrel, and the female RP-SMA has a center pin and an outside-threaded barrel.

Environmental demands dictate material selections for the manufacture of the connectors and surface plating. Use in harsh environments calls for IP68 versions of both popular standard SMA connectors and customer-specific bespoke designs. Materials The SMA connector body is typically either brass with a nickel or gold finish or stainless steel with a passivated or gold finish. The connector center contact/pin is most often brass or copper with a gold finish.

Like this article? Check out our other Meet the Connector, Wire & Cable and New Technology articles, our Datacom/Telecom Industry articles, and 2022 Article Archives.